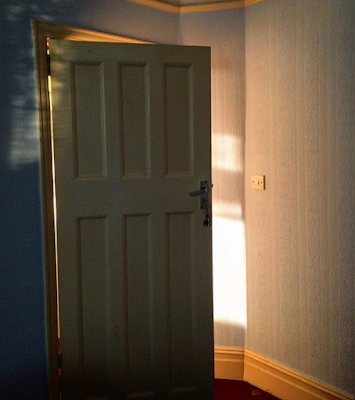 I suppose that isn't as short or catchy as the original, but it pretty much sums up how things have been for me, recently...

After a lot of frustration and rejection letters, I suddenly found myself with two companies wanting to interview me at the beginning of May. I didn't want to build my hopes up, but I had a good feeling that at least one of them would take me on. For the first interview, I had to get myself down to Battersea, to the new development which is being created around the old power station (which in itself is becoming redeveloped into things that most of us can't afford).

I arrived in Battersea in good time and got a bit damp, whilst I walked around having a look at the redevelopment work and what had already been completed. About 10 minutes before my interview, I went to the location, made myself known to a member of staff and was asked to wait for a short while. The short while turned into 30 minutes, before someone came over to me, apologised for the delay and explained that the person who I was meant to be meeting had double booked and was in a big conference call. I was asked to wait a little longer until someone else could become available and that's what I did. Eventually, someone came out and after a brief chat, I finally had an interview, which was actually pretty brief, compared to the waiting around, but I wasn't going to hold that against them. These things happen, etc. 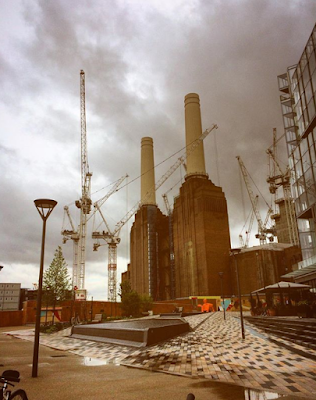 With the interview done and dusted, I went home and found an email waiting for me, inviting me for an interview for another job I had applied for. I got in touch with them and the interview was fixed up for the next day. This time, I was off to north London. On the day, I found the place in good time and was asked to fill out a few forms whilst I waiting to be called in for my interview. Again, the interview was pretty brief, but I left feeling fairly positive.

I got home and had an email from the place in Battersea, saying how pleased they had been with the interview and that they would be delighted to have me in for some trial shifts. Yes, you read that right... "trial shifts". If you have been lucky enough to have never experienced this term, then basically it means a company gets you to work for no pay and no guarantee that they will actually hire you at the end of the trial period. Free labour, basically.

Although I knew with this job, the hours and travel would have been a bit of an arse, my heart still sank, as I needed a job that started paying as soon as I started and this just felt like such a waste of time, especially given how long I ended up waiting past my booked time to be interviewed. 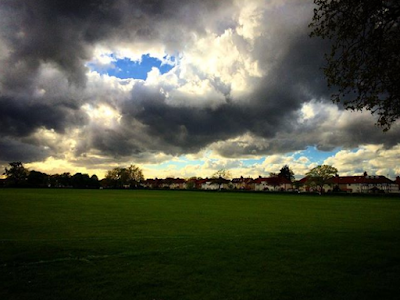 Before I could respond, I got a call from the other place I had just been interviewed at and they were offering me the job, which I accepted. As soon as I got off the phone, I was instantly hit with a nagging doubt. This job wasn't really like anything else I had done before and although it would draw on my customer service skills, I would be putting them to use in a very different way and I really wasn't sure if this was going to work for me. Despite all of these doubts, I decided that I needed to be brave and give it a go, so I wrote to the place in Battersea to kindly decline their offer and then I prepared for my leap into the relative unknown.

My new job started with a couple of office-based training days. These involved a lot of listening and a lot of notes. By the end of these training sessions, my head was spinning right round, baby right round like a record, baby but I was prepared to give it some time and see how things would shape up when I got out there, as this job would entail going to a different location every day.

The first day out in the field was a relaxed learning experience, so there wasn't too much pressure on me, but as the day wore on and I watched my colleagues at work, I was starting to feel a little daunted, given that they seemed so polished and at-ease with what they had to do, even though most of them had only been working for the company for a relatively short time. Despite my feelings, I wanted to stick with it and give it a good go. 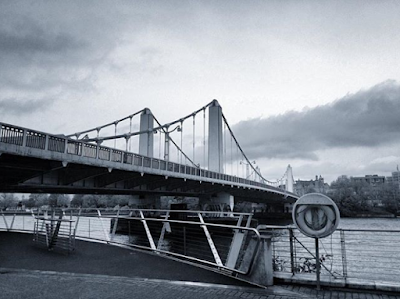 Over the next week or so, my training and learning progressed at a slow and steady pace. As each day passed, I was battling against the nagging doubts and trying to be positive, but I really was starting to find it hard to achieve what I needed to in order to earn commission, so that I could keep the job and earn enough money to survive. It was starting to become clear that in order for it to pay off, I was going to have to work twelve-hour days, six days a week, if I was going to be within any chance of earning a decent wage.

Then one Saturday, as myself and my colleague were on our way back to the office, I lost my footing and badly twisted my ankle. I pretended I was ok and that I'd get plenty of rest the next day but in reality, the pain was something else. The next day, my foot was still quite painful and a little swollen, but I thought I'd just rest it up and see how it felt. On my way in to work the following day, the pain was biting me, but I took some painkillers, gritted my teeth and got on with things. As the day went on, the pain got worse - not helped by being on my feet most of the time. The pain was also hitting my mood, which in turn caused my performance to slip, which my colleagues noticed. I was getting really paranoid and didn't want to seem weak in any way, so I said I was having an off-day and had just lost my confidence a little, which they accepted. By the time I got home, I was in complete agony and my foot was quite badly swollen. I decided to see how it was in the morning and take it from there.

Stupidly I still went in the next day, even though it took forever to get my shoe onto my injured foot. Once at work, I knew it was obvious I was in pain, so I just said I had twisted my ankle but it wasn't too bad. By the end of that day, I could barely walk and it felt like my foot was going to explode. I felt stupid, weak, tired and totally fucking fed up. This job had taken away all of my free time, loads of my confidence and now I was in so much pain I just wanted to shout and swear until my vocal chords died.

The following morning, I could just about get from my bed to the bathroom and back without needing a rest, so I let work know that I couldn't come in and would keep them posted. Later that day, I went to the nearest Urgent Care unit (most of the Hospitals near me have lost their A&E departments in recent years. Sound familiar?) and they suspected it could be a torn ligament, but suggested I saw my GP for a better opinion. I got appointment a day later and after an examination, he confirmed it. I was prescribed a course of anti-inflammatory tablets and told to give my foot total rest for  3-4 weeks. Great. By the end of the day, I had informed work and despite being disappointed, they understood the situation. 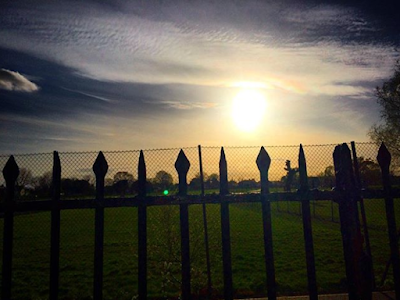 Very quickly, I grew bored of my forced rest, but I knew there was very little I could do about it. I did the usual: read books, watched TV, used the internet, but I soon got bored and frustrated with looking at the same four walls every day. Within a few days, I had started to think about the job and how it had been making me feel and if I could really do it for a long period. I could feel my old enemy depression creeping in and I really didn't want it as my companion for the next few weeks. I decided to start looking for other jobs I'd be more familiar with that weren't looking to interview right away, as I doubted limping into an interview in my slippers would exactly scream "IDEAL CANDIDATE" to a possible employer.

The weeks went by at a slow pace, but my recovery was coming along nicely. Sadly, the depression refused to budge and the job search wasn't going well. Work got in touch to tell me they were letting me go as I was still under the probationary period and they had decided that I should have been back after just a few days and making money for them whilst completely fucking up my foot, possibly for life. Part of me still thinks that I should have argued my case, but I was feeling very low and so full of self-doubt about the whole thing, so that was that. Surrounded by closed doors and in a shitload of pain.

I finally recovered and was at least able to get out and about, but I was unemployed again and the depression was not budging. Here we are, just over two months since I did my foot in and my head is only just in the right place in order to write about it properly, so I hope you understand the recent radio silence. My mood has lifted a little and I'm still hopeful that something will come along soon, but it is taking some of the shine off this glorious summer weather, I must admit. Of course, you only have to glance at the news to see that the World in general isn't exactly dancing kittens, flowers and rivers of chocolate, but there are often some positives around, if you know where to look. I have a few, they are lovely and they know who they are.

My search for employment continues. I think I feel better for writing all of this down. Bottling stuff up never helps - I know this and I frequently tell others the same - but like a lot of people, I'm always a little bit totally shit at taking my own advice. Also, it was really stupid of me to carry on despite the pain I was in. No matter how paranoid you get that you might look weak, don't suffer. Even though in the end, I did lose the job whilst recovering, if I had gone back sooner, then my injury probably would have put me in a far worse situation. There's always someone to talk to, if you find yourself in such a situation. I'm not exactly the best example to learn from but hey, nobody is perfect and if there's one positive I - and I think all of us - can take from my ordeal, is that basically, we're all better than Neymar.

Now, if anyone can help me open a few doors in here, I'd be very grateful. 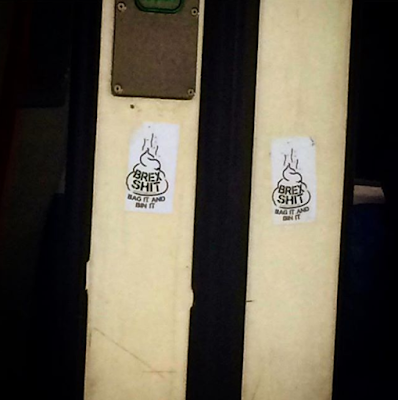 If you enjoyed reading this post, you can show your appreciation by buying me a Coffee, if you like.