AKA: When It's Clear You Have No Idea What You're Writing About

Shortly before the hiatus, I wrote this piece about the Daily Mail and the clickbait-type articles they publish on their website. Although I still avoid that website at all times and I usually stay away from most clickbait links but every now and again, such a link will intrigue me enough to have a little look - if only to see how shite it is.

Such a link appeared in my Twitter timeline earlier today, as a promoted tweet and... well... it didn't disappoint. Dear readers, I present to you this 2016 collection of "Secrets" About Eastenders You Were Never Supposed To Know... 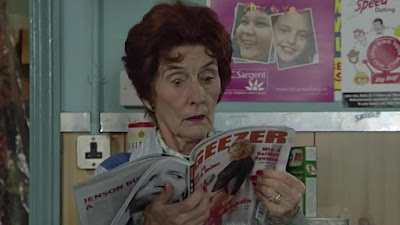 Like most of these list articles there is only one point on each page, so in order to read the whole item, you have to click through to several pages, which means they get a very healthy-looking hit count and they get to display more adverts. Feel free to have a little look at the article itself, but if you really can't be bothered, then here are some edited highlights...

On the very first page and right under the headline, the opening part of this article is as far from a secret as you could possibly get and has never been something that the producers have tried to hide. I mean, how can you hide Adam Woodyatt playing the same character in a show since it started in 1985 and why would you want to, anyway? 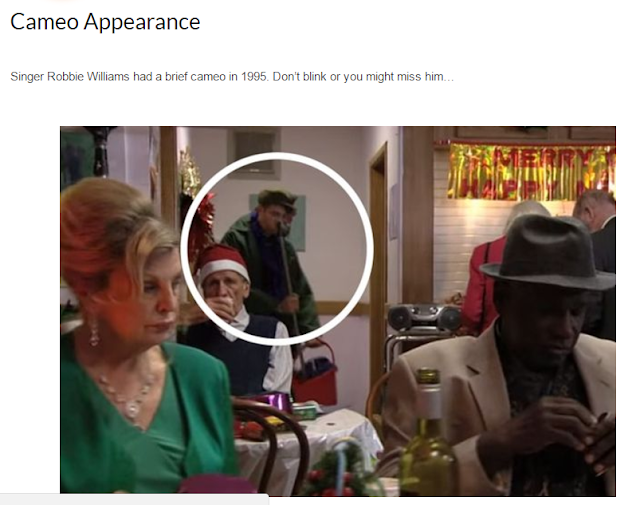 ...Except that's not a still from a 1995 episode and that's not Robbie Williams in the background. That's actually Radio 1 DJ Nick Grimshaw making a cameo in 2013. I'm no expert on Eastenders, but even I can tell that is not an image from a 1995 episode of Eastenders. Also, I remember when Williams appeared, as it was mentioned on several TV shows and in the usual sort of newspapers, and he was actually in The Queen Vic as a customer. I can't seem to find a decent image of his appearance as I write this, but do feel free to point me in the right direction if you do. 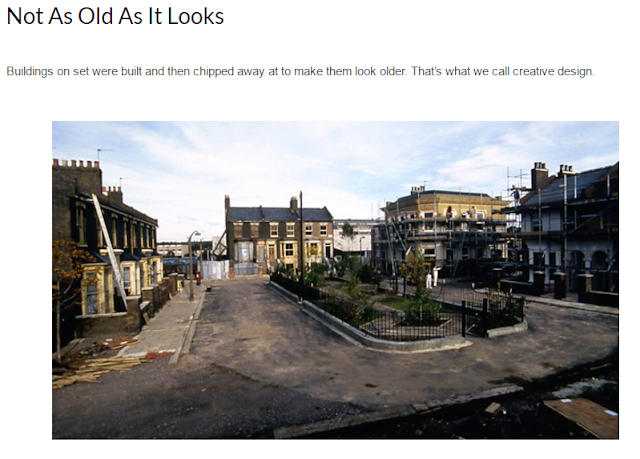 Alright, so I admit there may be some people who might not know that Albert Square and the surrounding streets are a custom-built set designed to look older than it actually is, but it's not exactly something that anybody working on the show has tried to hide. I also find "chipped away" a bizarre choice of words that don't really make sense in this context. Surely "distressed" or "artificially aged" would have been better. The article does redeem itself slightly though, by using a great picture of the set under construction. If you want to see more images of the original Albert Square being built, then this Londonist article is worth a look. 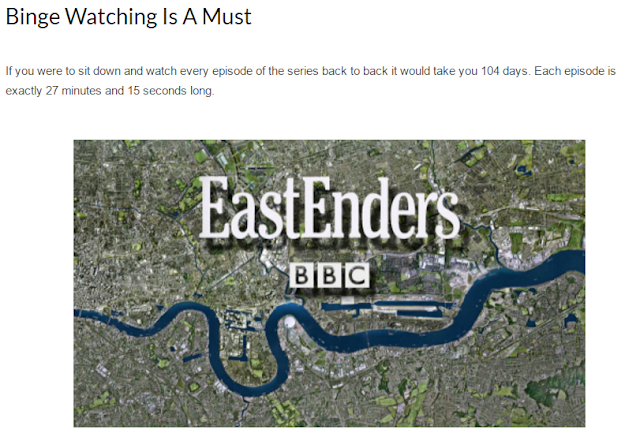 Although I have no idea how long it would take you to watch every single episode back to back (coupled with the fact that it's an ongoing figure, so long as Eastenders continues to run), the claim in this article that each episode is 27 minutes and 15 seconds long is total bollocks. For one thing, there have been a number of episodes lasting 60 minutes and the last 3 episodes (as I write this) have running times on BBC iPlayer ranging between 27 and 28 minutes. TV shows tend to have a target running time that it should ideally meet or just fall slightly short of. A small over-run of 10 seconds or so isn't usually an issue, but so long as there is enough room to fit in some trailers and an ident after the episode before the next programme starts, then the producers won't be asked to trim the episode down. Back when Eastenders started in 1985, broadcasters tended to do less in the way of programme promotion between shows, so an early episode of Eastenders may well have been only followed by one trailer and then the BBC 1 ident into the next show, so the average episode would have probably been closer to 29 minutes and 30 seconds (I can't check right now, as BBC Worldwide have sadly deleted the first 60-odd episodes that used to be on their YouTube channel). 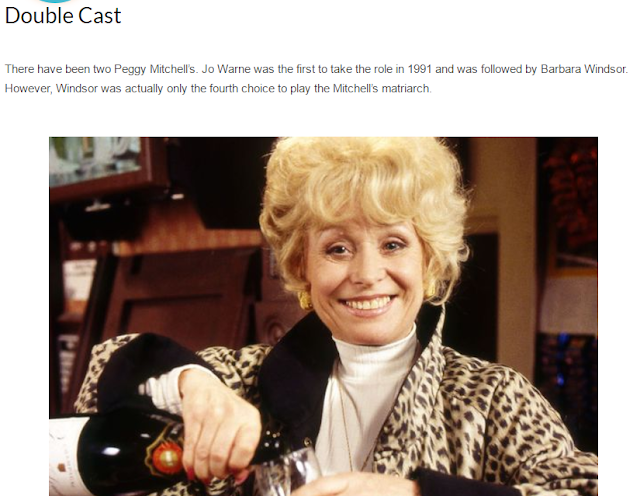 Yet again, this isn't a secret. Although Peggy's change in appearance was never mentioned on screen when Barbara Windsor took on the role in 1994, it wasn't exactly covered up by anyone on the production. Next! 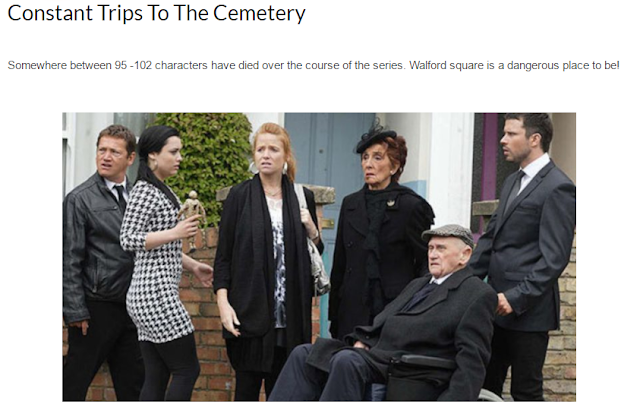 According to this list on Wikipedia, the death total was at 113 by the time this article was written in October 2016 (119 as of the time I'm writing this), so sort of close, but it's still a bit vague. It's annoying, but it isn't the main reason why I'm drawing your attention to this part of the article...

"Walford Square is a dangerous place to be!" 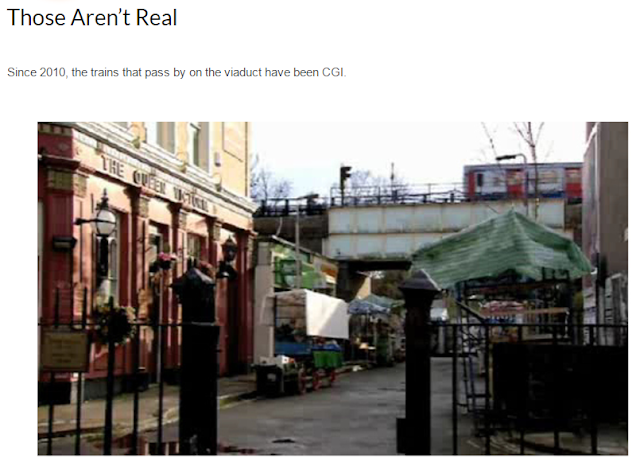 Ok, so this is true but once again, it's not exactly a secret. To be honest, I only wanted to include this one as an excuse to show the awful "futuristic" train that crossed the bridge in 1993's Children In Need Doctor Who/Eastenders crossover "Dimensions In Time"... 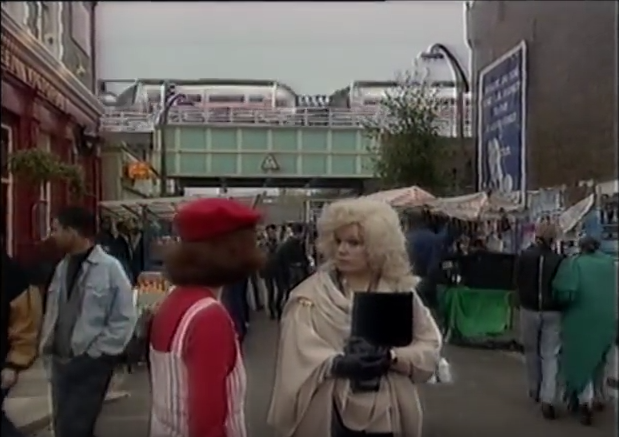 It's not even in TfL colours...

This is just a selection of "facts" and "secrets" from this poorly thought out and badly researched article. There are other dubious pieces of information and indeed some repetition, but you can have a look for yourself, if you wish. I know most of these clickbait articles are as bad as this one or even worse, but this one doesn't even try beyond the headline. Seriously, what's the point?