When I came up with the idea for my previous post about North Acton and its BBC-related past, I had recently taken a rather moody black and white photograph of another former BBC site, only in this case, the  BBC have left, but the building still stands.

If the title of this post hasn't given it away, then the following photo - the one that inspired my last post - certainly will... 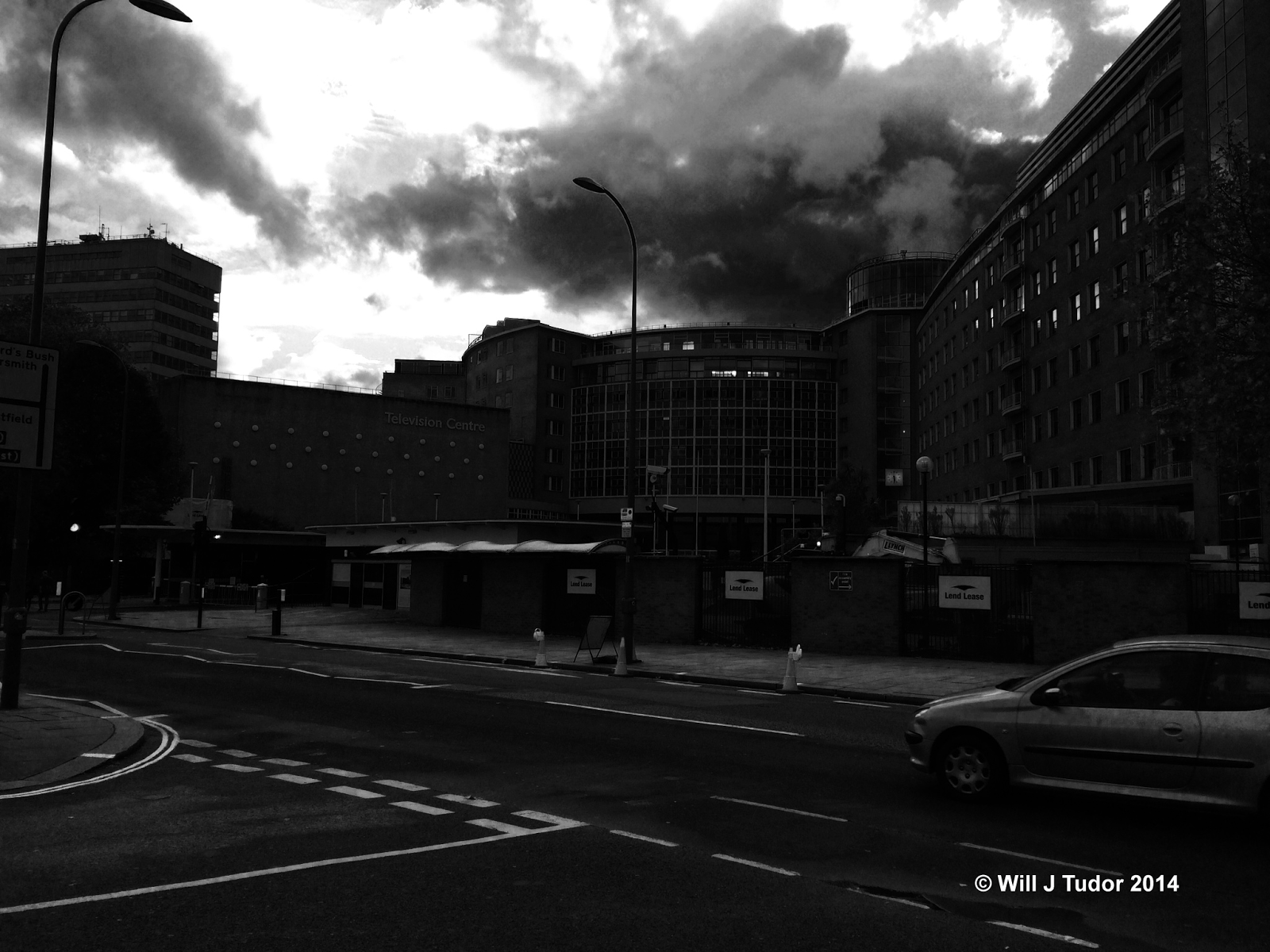 For someone like me, who has grown up with an obsession about broadcasting, this is a very sad sight indeed. TV Centre looking empty and boarded up, with the BBC lettering removed from the exterior of TC1 (TC1 being the name of the main studio, which played host to thousands of shows, included "event" television such as Children In Need, Comic Relief and Strictly Come Dancing). It really shouldn't have happened.

I'll spare you the history of TV Centre in this post, (partially to keep it relatively short, but mainly because I can't beat the best document of this extraordinary buildings life, which appears on Martin Kempton's website) but it's fair to say that this building is iconic in so many ways, yet here it now stands, scaffolding in places, skips everywhere and the exterior TC1 lights and signage turned off.

Ever since I moved to North Acton in early 2013, I've passed TV Centre on my way to and from work. Even then, it was obvious that closure was near, as it didn't seem as busy as I remembered it on previous trips here, including the time I did the official tour with my brother. One thing that was always nice though in the final months and weeks, was how beautiful the building looked in the evenings, all lit up, especially the upper floors of the central circle or "concrete doughnut", with long neon strips in different colours, running along the ceiling.

It looked stunning, right up to the "closing night", when Madness played a special concert in the front car park. Being a huge Madness fan (as any other Madness fan may have gathered from the title of this very blog...), I applied for tickets to stand in the car park and watch the concert as it was broadcast live on BBC Four, but I was unlucky and didn't get any. I decided to go along anyway, to at least see what the place looked like for one last time before the BBC moved out. It was an amazing site... BBC TV Centre on its "closing night". The stage was set for Madness to
begin their concert to help send the building off in style.

As you can probably see in the above photo, a crowd had started to gather outside the main gates of TVC, so I decided to find a suitable spot, as close to the stage as I could get, and be part of this sad, yet memorable occasion. It was brilliant seeing Madness performing (as it always is. They really are a band that has to be seen live) and BBC staff dancing in their offices.

It was a wet, windy and bitterly cold night, which to me, added to the bittersweet mood of the whole occasion. Madness - a band who used to mime badly on purpose when performing on Top Of The Pops, who had played on top of Buckingham Palace and at the closing ceremony of the London Olympics the year before - now playing at what was essentially the closing ceremony of BBC TV Centre. The closure and vacation of the building by the BBC is something that really shouldn't have happened.

The whole subject of the BBC leaving this iconic site and condemning it to partial redevelopment and demolition is something that really makes my blood boil. I'm not the only one, as many ex-TVC staff and well-known personalities have spoken out against the move, hitting out at the well-worn PR stories about the building and its studios needing millions of pounds to bring them up to date in a digtal, HD age. The fact is, most of the studios (certainly all of the main ones) had already been upgraded over the previous decade to become some of the best-equipped studios in the UK.

Add to that, the £200 million the BBC got for the sale of TVC has been well outstripped by the cost of moving staff and studio equipment out to other areas, among other costs. When you look into the costs involved as a result of this whole debacle, it makes the whole sale look like a ridiculous expense, rather than a way of raising and saving money.

As is often the case, I have sort of drifted off topic here, but what is happening to this icon of British broadcasting and architecture really is sad and horrific. Only 3 studios will remain when the BBC return to lease them from the company they sold it to. That really isn't enough, and if you look at the relevant parts of Martin Kempton's TV Centre page, you can see for yourself how ridiculous it all is.

The building will not die completely, but a huge part of our heritage will.