"You'd think Devil Woman had never been written!" - My thoughts on Rik. 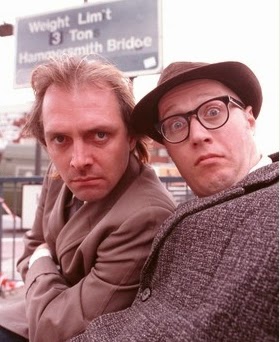 As I write this, I'm still in shock about Rik Mayall's death. Everyone who followed his career, grew up watching him, quoted lines from his characters time and time again is still in shock. Of course, our feelings can't possibly compare to those of his family and friends, but it really is a terribly sad loss.

This might sound a bit stupid, especially so soon after the event, but I'll always remember where I was when I found out: in the back of the family car on the way back to my Mum and Dad's house from my Uncle's funeral. As you can probably understand, it had been a long, tiring and emotional day. I decided to check my Twitter feed, as I had only just turned my phone back on and within seconds, I could see my timeline starting to fill with the news and various reactions. Then the quotes. So many quotes from the many characters he played... most notably the monologue from 2:25 in this clip:

"But why are the kids crying?"

Well, it's kind of true. We still have his comedy and indeed, that house has become a shrine, as people have been laying flowers and tributes outside the house in Bristol that was used from the 2nd episode onwards. Not to mention the unofficial Blue Plaque that within hours, appeared on Hammersmith Broadway, close to the spot used for the "bench" sections of the Bottom opening titles...

***
UPDATE: The small traffic island in Hammersmith became host to a large shrine for Rik over the days, weeks and months that followed. Following an online campaign, a memorial bench was installed on the island in November 2014, close to the spot the original used to sit. I finally went to the shrine a couple of weeks after the bench was unveiled...

If you need proof of how much of an impact Rik has made on this planet, then you can safely say the above is a bloody good indication. It's hard to find the precise words to describe Rik and what it was exactly that made him so unique, so fresh and so much of an influence upon more than one generation during his life. He came onto the scene just as Alternative Comedy was becoming an actual thing. To say he was one of the Fathers of it is not an exaggeration by any means.

By the time I was born, the final series of The Young Ones had aired, The Comic Strip was well into its stride on Channel 4 and like it or not, Rik Mayall and his colleagues were everywhere, in particular his long-term writing and performing partner Ade Edmondson. Among my very early memories, Rik is there, making people laugh, being twatted by something and/or twatting someone else. It was inevitable that he was going to have a massive influence on me.

Going through Primary and most of Secondary School, I kept it to myself and I was extremely introverted on the whole. Then, in my final year, just as we ended our normal timetable in order to revise for our GCSE's, myself and two other pupils were asked to improvise a short scene to perform at our final assembly. Sure enough, we crammed quite a few Young Ones and Bottom references (i.e. quoted verbatim from) into our sketch. About half of our fellow pupils in the audience laughed and the less-stuffy teachers did their best not to.

Fast forward a couple of years to my second College (the first one was crap) and one of our early tasks was to select and perform a monologue of our own choosing. I'd recently been given the VHS compilation of Rik's Kevin Turvey monologues from A Kick Up The Eighties. So, I chose one, transcribed it and rehearsed and rehearsed...

Needless to say, nobody really got it and I doubt my performance was all that helpful, as I tried to imitate Rik too much and failed. But I chose it because I guess I identified with his love of playing characters who tended to be rather pathetic, desperate, sad, but funny. Very funny. Dangerously funny, to the point of reducing his audience to hysterics that almost require medical help.

Rik didn't just do that with witty lines. He could do it with silly lines. Or overly serious faces. Even stupid ones worked for him. It would have been easy to have become jealous of Rik, but you just couldn't, because he was too funny and as many people have repeatedly made evident since his death, he was such a genuinely nice bloke. If I have any jealousy over Rik, it's for those lucky bastards that got to meet him and the even luckier bastards who got to work with him.

Even after doing the Turvey monologue, I would often find my performances influenced by Rik in one way or another. Sometimes I succeeded, sometimes I failed, but I always ended up laughing when I thought of how he would handle various situations.

I know I'm not alone in feeling terribly sad that the world has been robbed of a future filled with Rik finding even more ways to make us laugh until we need an oxygen tent, but as I look back at these last few days, the sadness and shock has been balanced out by the memories: The classic clips, the forgotten gems, the anecdotes from people who knew him and fans who met him, right down to the letters and birthday cards he sent out to people who wrote to him with requests (oh, to have been called an "utter UTTER UTTER BASTARD" in writing by Rik...). We'll always have what he gave us in the short life he had and for that, we should be grateful. I certainly am.

It's time to draw this post to a close and as Rik and Ade often did, let's finish on a fight...

Thank you, Rik, for everything.

Email ThisBlogThis!Share to TwitterShare to FacebookShare to Pinterest
Labels: 2014, Bottom, Hammersmith, Rik Mayall, The Young Ones