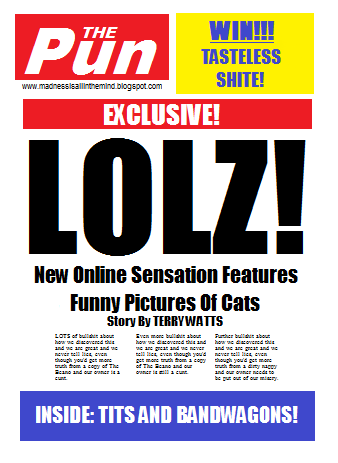 
SIR HENRY: I say, have you seen this story in The Sun about a new craze sweeping the online called LOLcats?

SIR TIMOTHY: No, I haven't! What on Earth is a LOLcats?

SIR HENRY: It appears to be a load of photographical images of cats that have had amusing captions written on them to give the appearance that the felines are talking.

SIR TIMOTHY: Oh, I see! Well, that sounds like a jolly good laugh. Tell me, Sir Henry, what is this thing called online?

SIR HENRY: I'm not entirely sure, but I think it is some new form of communication. There's a feature on the same page that tells us "Five handy facts about the space-age phenomenon called the internet".

SIR TIMOTHY: That should tell us all we need to know, no doubt.

SIR TIMOTHY: What is it?

SIR HENRY: There is an image in here that reportedly shows Cheryl Cole taking a photograph of her friend using, incredibly, a very small, portable telephone!

SIR TIMOTHY: My word, that's amazing! Did you see their exclusive last week about alleged plans to start  something called a television service? It will be like radio... but, with pictures!

SIR TIMOTHY: I know! Apparently, experts predict that these pictures may even be in colour by the end of the century. An insider said "Nobody will want to go to the music hall or picture house anymore, as they will have a whole hour of entertainment every day in their own sitting room!"

SIR HENRY: This is fantastic news! I wonder if there are any developments on this subject... now... let me see... nothing on page 1... no... nothing on page 2... and.... Ah! Here we are... Katy, 23 from Chelmsford says "This news is a welcome boost for our economy during these difficult times". She doesn't appear to be wearing many clothes and you can see her breasts.

SIR TIMOTHY: Shocking. Is she one of those wretched suffragettes?

SIR HENRY: I believe so. There is something on this internet called a website that features lots of pictures and something called videos of her and other women like her.

SIR TIMOTHY: Disgraceful. I must conduct a full investigation of said pictures before I present a bill in  Parliament to have this... this degraded interweb closed down forthwith!

SIR TIMOTHY: I told you not to say anything about those things, Sir Henry!

SIR HENRY: Oh, don't worry, you're among friends in this establishment, remember! Just you, myself, Sir Keith, Sir Edward and Chief Inspector Roberts of the Yard.

SIR HENRY: Sir Timothy! What are you doing!? Get away from the window ledge! SIR TIMOTHY, WHAT ARE YOU PLAYING AT!? MEN CAN'T FLY!!!

With thanks to my brother, Dave, for his contributions to the above.
Posted by Will at 18:53